We invited Architect Juan Alfonso Peña to visit the site one day. He’s been building natural homes for quite some time and had lots of advice regarding the stability of our structure. He made a few recommendations, one was to include more beams in the balcony, another was to include some diagonal supports, and another was some tension cable.

The diagonal supports, or Trusses, have always been part of the design. With the structure of the building exposed it will be easy to add these later as their main function is support in high winds and earthquakes, preventing lateral movement.

The tension cable however is something we did right away. My understanding is that reciprocal roofs only create downwards force, rather than pushing laterally on the columns. But if anything was going to move, it would most likely be that the columns would be forced outwards or that the connections with the beams would break. For this reason we installed two tension cables. One circle through holes in the ends of the beams, and one circle through holes in the tops of the columns. With two 1/2″ tension cables there is no way the circle can get any bigger. 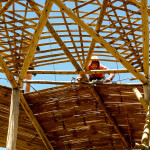 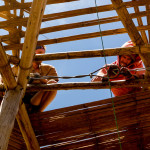