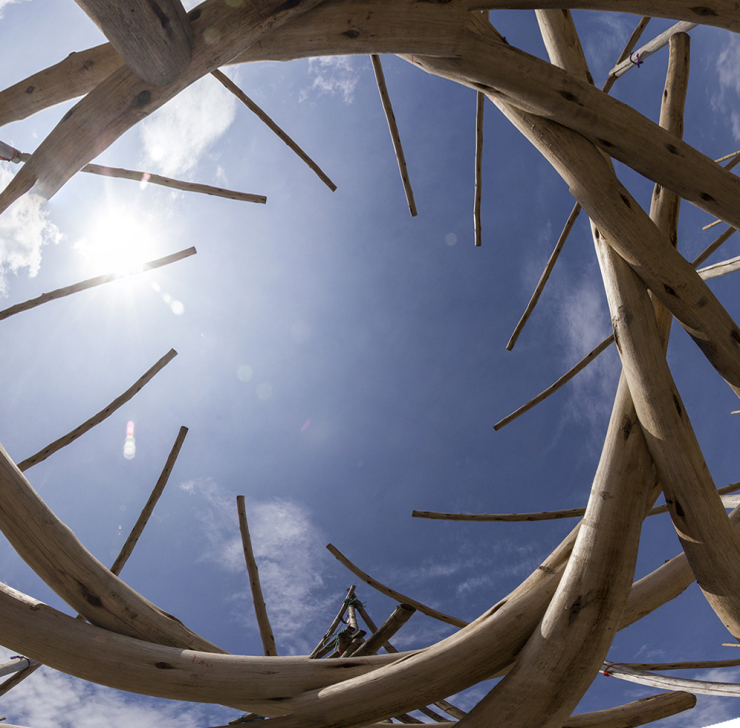 We simulated the position of the inner reciprocal beams on the ground before raising them. The usual procedure is to approximately notch where the beams will overlap and then hope that they settle into place once raised. Instead we positioned them exactly as they would be so we could cut the correct angle on the notch. Using a metal sheet as a level, we marked a 1.5m circle which will be the size of the central sky light. We then placed 4 marks on each beam, which were determined using cad software.

4. 40 cm from line 3 where we will cut the beam off later (we are leaving them long for now, its not much extra weight and it will help with lifting them

We then placed the base of beam 1 by the base of column 1, and using a plumb line we aligned lines 2 & 3 over the skylight circle. A temporary ‘charlie’ stick of 106.6cm was placed under line 3 to simulate the roof pitch.

Next we cut a notch at line 2 and placed the second beam in the notch, adjusting as necessary until line 3 of this beam was 106.6cm over the metal sheet, again using a plumb line. Finally we marked a level line on the base and tip of each beam so we could get the notch on top easily when reassembling. We continued around the circle in this manner until we were at beam 9, when we took it all down repeat the process from the beginning for the final three beams. With the roof in its final position it would be impossible to slot in the final beam, hence dismantling the first 9. When we raise the roof the charlie stick will be 30cm higher than necessary to leave a gap over beam 11 through which beam 12 can slot, under beam 1; more on this later.

In the other photos you can see our 6m long drill bit, a standard 1/2″ bit welded onto 6m or rebar, which we’re using to drill holes through the bamboo so we can pour in borax solution to preserve them. You can also see our new rope harness being tested, thanks James. 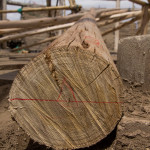 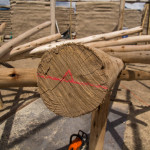 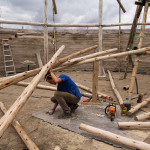 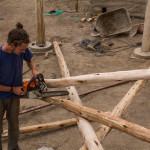 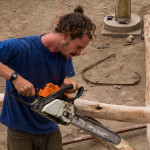 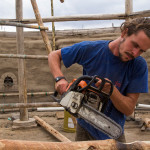 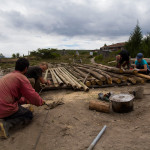 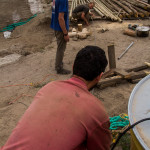 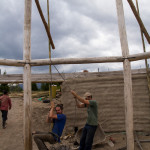 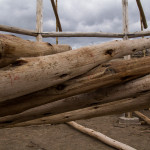 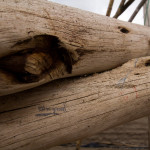 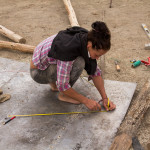