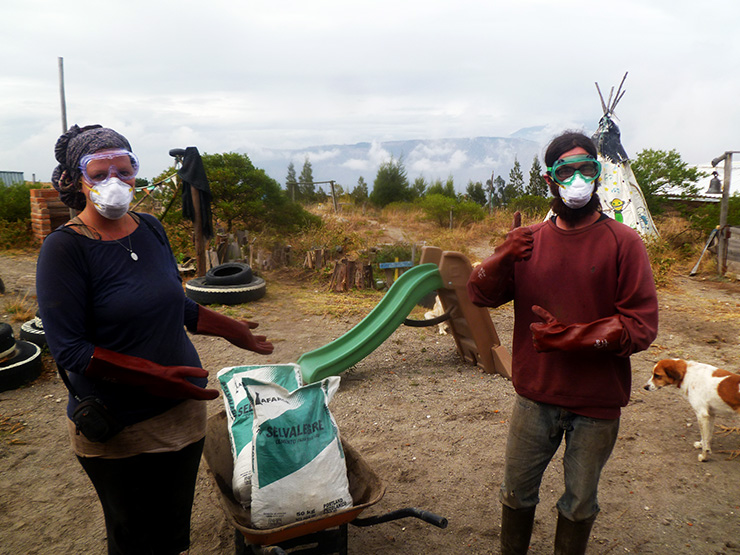 Living in a region which receives regular, heavy rainfall for part of the year, it is necessary, or at least preferable, to add an additional protective plaster layer over the adobe, which, if left untreated, will get washed away by the rain. The ideal, and traditional, material to use when working with organic materials is lime. Lime reduces water penetration, while allowing water vapor to escape, whereas cement allows higher quantities of water to enter while preventing transpiration of water vapor. This means that cement-covered walls of organic material will be given to rotting and mold, while lime plaster protects the sensitive organic materials within.

To obtain lime plaster, limestone is mined from the earth and fired at very high temperatures, a process during which CO2 (carbon dioxide) is driven out of the limestone, creating what is known as “quicklime”. When quicklime is added to water, a process known as “slaking”, it is converted to a substance known as “hydrated lime” or “lime putty”. When this putty is combined with sand and applied to a wall as a mortar, another chemical reaction occurs in which CO2 is reintroduced to the substance (making the process nearly carbon-neutral!) and over time it will revert back to limestone.

It took us ages to hunt down a source of quicklime, but we finally found it recently. We’re now in the beginning stages of applying lime plaster to our walls, and we’re learning as we go, so a bit of experimentation is required.  But basically we apply two layers, the first being made with a slightly coarser sand, and the second, to be applied on the following day, made with a finer sand. Both mixes are prepared using a ratio of 3:1 sand to lime putty. This is the ratio that most sources recommend, and in our own experimentation it proved to be the best. We apply the lime using trowels, and after the first coat has been applied, we use the trowel blade to make hatch marks all over it, which gives the next day’s coat something to grab onto. As the lime dries, it starts to harden and give the wall a beautiful finish. Once completed, the next step will be to make a lime wash which will paint and further protect the wall.